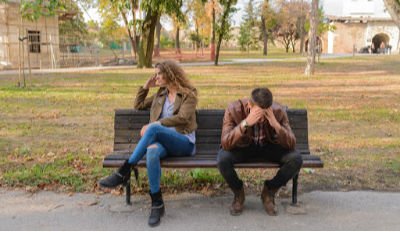 The ability to compromise is one of the requirements for a successful long-term relationship. Although when the relationship ends, it’s pretty common to realize that what you were calling compromise really wasn’t. You discover you were giving in or giving up for the sake of keeping the peace or being a wonderful partner. In essence, you lost and your partner won.

If someone wins and someone loses, it’s not compromise. It’s a contest and there’s a score.

Although we’re taught to be good sports when we’re kids – you know be a gracious winner and a good sport about losing – I don’t know anyone who likes to lose again and again and again. That’s because continually losing in a contest can lead us to think that we’re less than our opponent. When our opponent is our partner, it’s a recipe for disaster. They start to also believe that we’re less than they are and treat us that way. Then, we start resenting them and lose a little piece of ourselves every time we stuff our thoughts and feelings for the sake of “compromise”.

Compromise isn’t about always doing what someone else expects or wants. Compromise in a relationship is about two people who respect each other being able to freely talk about what their different thoughts and ideas are to arrive at a mutual decision which will allow them to move forward in some way.

Now, you and I both know that this isn’t how most of the real world of relationships works. This “freely talk” stuff is often accompanied by raised voices and maybe a slammed door or two. BUT the key is that both people are able to be heard when they speak about what’s important to them. Granted it can be hard to be heard when two people are yelling at each other so compromise usually works best before the issue reaches a fevered pitch.

When I first got married I thought that compromise just meant that things were able to move forward in some way – not that my feelings and thoughts were valuable and needed to be part of the equation. I believed that so long as my husband was happy that I should be happy by default. If he wanted to do something, then I should be OK with it no matter what I really thought. I convinced myself that we were great at compromising. What I was great at was giving in and giving up so we wouldn’t argue. And every time I did that, I thought less of myself. I lived like that for 18 years. That’s a long time to continually chip away at your self-esteem and identity.

When we divorced, part of me felt free. I wouldn’t need to worry about pleasing him anymore. Another part of me was scared because I realized that meant I could focus on pleasing myself, but I wasn’t really sure what I liked or wanted. It had been so long since I had allowed myself to know me – the real me.

Fast-forward to today and I’ve been remarried for 4 years. I know who I am and what makes me happy. One of the things my new husband and I continue to work on is the art of compromise. I’ll be honest when we first got together we had more contests than compromise. There were plenty of raised voices and doors slamming, but today we’re much better at compromise. Compromise for us requires looking at the bigger picture instead of only what’s going on in the instant. We look at what our overall goals are for ourselves, each other and our relationship. Once we do that, it’s so much easier to compromise instead of battle.

And this experience is why I believe that the ability to compromise, really compromise, is a key part of being in a successful long-term relationship.

How would you like compromise to be different in a new relationship? Most people see the value in compromise instead of conflict or even always getting their way. What’s your opinion?

Feeling like you would appreciate some outside support with this whole idea? You might want to contact a therapist or a divorce coach to get a different perspective and some tools for how to make your next relationship great.

If you’re looking for more help answering the question “Should I stay or should I go?”, read more in Unhappy Marriage?